An Interview with Katsushika


I discovered Katsushika’s work while looking at souvenirs displayed at the front of a souvenir shop in Mount Fuji 5th station, pictures of a great engulfing wave with Mount Fuji at the back ground on mugs, fans, key holders, and tee shirts. Somehow its uniqueness sticked to mind as something of Japanese painting style, in otherwords it branded itself as something Japanese, it becomes iconic. Such is the power of this picture.


Later, upon browsing the internet I discovered that it is the well known “The Great Wave off Kanagawa” woodblock print work by Katsushika Hokusai, which is part of his Thirty-six Views of Mount Fuji woodblock work.


Then I attempted to reach Katsushika-san for an interview, and managed to meet him in one great sunny morning at his residence.


“Katsushika –san, your famous “The Great Wave off Kanagawa” and other most important work from the Mount Fuji series were made at the beginning of your “final years”.  You already had a long career in ukiyo-e – the art of the floating world – with beautiful prints of hurried pedlars, kimonoed courtesans and pilgrims spellbound by the moon over your home city of Edo (old Tokyo). Yet, your master piece creativity seemed to bloom in your final years, in your seventies. Why did you “emerge” so late?”


“The 1820s was a difficult time for me, I was struck by lightning at 50, suffered a stroke in my 60s that required me to re-adapt to my art work. So I did little work in my sixties; my wife got ill and one of my daughters died. I could cope because that time I was prosperous from my work.


But then I was faced by my grandson misfortune who had a lot of debts from gambling habit and I had to pay off all his debts. But in about 1828, I sent my grandson away to the far north of Japan where he couldn't gamble. Then I was free to devote my energy to my creative work. Although, even while drawing the Thirty-six Views, I had scarcely any food. Edo was ravaged by smallpox and flood, and a fire in 1839 destroyed all my studio work.


One of the factors for the emergence of my work was the introduction of Prussian blue to the market, imported from the West. As a synthetic pigment, it is more lasting and it lowered the price enough that it became feasible to use the shade in prints for the first time.


A print produced entirely in Prussian tones looks like a landscape during pre-dawn. Also, the Great Wave seascape incorporated a middle distance, with Mount Fuji in the remote background, so that the foaming blue foreground wave gives the picture a deeper dimension.”


“ The period of ukiyo-e – the art of the floating world – represented the floating Japan, or the prosperous Japan, which generally depicted the pleasurable side of urban living – courtesans and kabuki actors included. It was the period of Japan’s hedonism world, living life for the moment, partying, dancing, getting drunk, along with the economic boom in Edo (old Tokyo).  The art of this floating world, ukiyou-e, raised with the demand,  pictures of Kabuki, beautiful women, geisha, courtesans became popular and displayed at homes. Hence you were floating too, your wood block print works were sold well that time.


Then came your Great Wave woodblock print depicting a very huge wave about to swallow the two floating boats of fishermen. Was it some kind of a “tsunami warning” to the floating world approaching in a few minutes?” 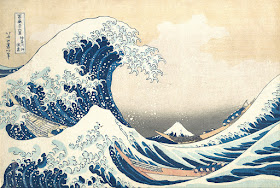 
“It is not a tsunami, it is a huge wave, but not a tsunami. It was meant for decoration, depicting one of the various views of majestic Mount Fuji, in Prussian blue. For me, the world is more panoramic, and the joy lies in making new graphic representation for each visual phenomenon. Such that more than 5000 prints of the Great Wave had been made and sold that time.”


“Indeed you are known to be a good businesman, you have a good sense about popular demands. You are also good in promoting yourself, creating massive paintings in public with the help of your students. At a festival in Edo in 1804, you painted a 180-meter-long portrait of a Buddhist monk using a broom as a brush. Years later, you publicized your best-selling series of sketchbooks with a three-story-high work depicting the founder of Zen Buddhism.”


“From the age of six, I had a penchant for copying the form of things, and from about 50, my pictures were frequently published; but until the age of 70, nothing I drew was worthy of notice… Thus when I reach 80 years, I hope to have made increasing progress, and at 90 to see further into the underlying principles of things, so that at 100 years I will have achieved a divine state in my art, and at 110, every dot and every stroke will be as though alive.”


“You painted dragons, creatures of long life, by the dozen. You painted the phoenix, bird of resurrection, and Mount Fuji;  immutable, enduring, outlasting all your fellow painters, calligraphers, woodblock-cutters and sellers of coloured books who scrabbled for a living Edo, old Tokyo.


You changed your name so frequently, about 30 times, often related to changes in your artistic style and production, that are used for breaking your life up into periods.”


“In my seventies, I was Manji, which meant ‘ten thousand things’ or ‘everything’. That is what I wanted to paint — everything. My tombstone shall bear my final name, Gakyo Rojin Manji, which translates to “Old Man Mad about Painting.” 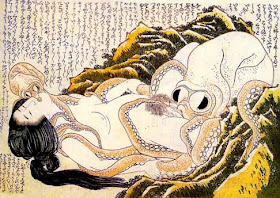 
“Shunga is sexually explicit art, produced to exactly the same technical perfection as art in other formats by the same people. The Dream of Fisherman’s Wife was based on the story of Princess Tamatori, highly popular in the Edo period.


In this story, Tamatori is a modest shell diver who marries Fujiwara no Fuhito of the Fujiwara clan, who is searching for a pearl stolen from his family by Ryūjin, the dragon god of the sea. Vowing to help, Tamatori dives down to Ryūjin's undersea palace of Ryūgū-jō, however then pursued by the god and his army of sea creatures, including octopuses. She cuts open her own breast and places the jewel inside; this allows her to swim faster and escape, but she dies from her wound soon after reaching the surface.


The Tamatori story was a popular subject in ukiyo-e art. The artist Utagawa Kuniyoshi produced works based on it, which often include octopuses among the creatures being evaded by the bare-breasted diver.


“ Then who are the consumers of this Shunga art?”


“In the Edo period it was not only men who appreciated Shunga, but women were also customers. Further, there clearly was interest in Shunga from the young and old, regardless of status or location, and included commoners in the cities, farmers, as well as first-class intellectuals and powerful daimyos.  We can also see that shunga was not simply for stimulating sexual desire, but aimed to depict a wide range of aspects of sexuality.”


“ Thank you for the interseting chat Katsushika-san, wish you long life and success with your work….”


This is an imaginary interview in memory of Katsushika Hokusai.
Source: Wikipedia