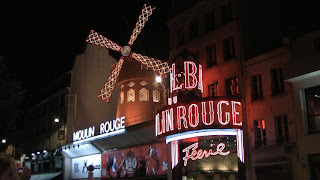 On a warm night in July 2009 the Red Wind Mill came alive. The fairies came alive, dancing and singing bare breasted and kicking legs as high as the cloud.


One of the girls jumped into a see through water tank which rose from the stage. There were snakes swimming in the water. She swam with the snakes. The theme was Medusa.

In another act, about circus, they paraded several ponies to the stage.


It was purely spectacular entertaintment, the setting determined the theme. It seems that snakes in the tanks detemined the Medusa theme and the ponies determined the Circus theme.


But the audience enjoyed it, the colorful furs, costumes, lighting, music and dance. No body seemed to care that they don't understand the songs, they were in French. Probably the melody determined the lyrics too. Nevertheless they all sound romantic.

The dancers are internationally selected, but they looked like the same type, size and face. Probably the stage make-up made them look the same, although the costumes were different.


Outside, in the middle of red light district, the red windmill kept revolving.


The same show, named Feerie or Fairy, has been running for 10 years, and still full house every night. Maybe the Japanesse tourists just want to see the half naked bodies.
Posted by stenote at 5:09 PM No comments: