Narita, at the Airport 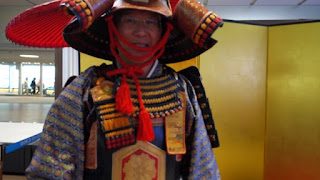 I must confess that I like Airports, to experience the atmosphere, to observe the architecture, to see people travelling and the unformed air crew walking like on a catwalk, the decorations, the spacious and clean toilets, and not to mentioned good stuffs in the souvenir shops not found in the city.

So, I like to leave our hotel early, apart from to get enough time to travel in case there are traffic jams  on the way, or in case I board the wrong bus or train, or get on the wrong terminal, I just like to come to the airport early.  Arriving early also give us enough time to check-in, considering that sometimes the queues are very long, to go the faraway tax refund counter, then going through the lengthy security check, and passport check. Depending the country, the security check could be slow and annoying, and so is passport checking. So, allow time for that.

The travel from downtown Tokyo to Narita is about 60 km, if we take the non-stop express train it will take about one hour depending on our hotel location, the door-to-door journey takes between 90 and 120 minutes. Many train stations in Tokyo are huge, have confusing layouts, the direction signs are not so clear and most of them do not speak English, so it is hard to find your train if you are not familiar with the train station. So learn first the train station though the website, and even better if you come before your travel to familiarize the layout.

Like other travel writers, I have to frequently fly solo, I generally arrive at the airport more than two hours before my flight. This way I get time to wander around the airport corridors, looking at the fabulous design of luxury brand shops, hearing the crispy announcements, watching various airplanes  landing and taking-off. At the Narita Terminal 1 and 2 observation decks, we will have a perfect view of the planes landing and taking off, and from the corridor windows we can see the parked and taxiing planes.

The airport is also great for people watching, I think every one like to do that, to look at the excitement on the face most of the travelers, the cool frequent travelers, the worried face of the late travelers, the honeymooners, but there are also sad faces. In Narita most of them are trendy upper middle class people, the older dressed neatly ironed clothes with hats, the younger more hip hop and bright. I also saw a couple of lovers, the woman looked like in the early 30’s wearing very boutique like clothes, shoes, bag and colored hair while the man much younger in the early 20’s wearing red black checkered shirt loosely and baggy pants. They looked so much in love.

If you missed a meal before travelling to Narita, the Airport has many restaurants decent to good food, a wide variety of Japanese food, tempura, yakiniku, tonkatsu, sushi, ramen, and soba, but also Western, Chinese and vegetarian food. Unlike any other airports, food here is also not much more expensive than in central Tokyo. If you are in a hurry go for the ramen noodles, you fill full enough and have more time to wander. In one of the ramen noodles shop I saw a teenage girl with a teddy bear backpack, eating her ramen thoughtlessly, she seemed to miss someone left behind in Tokyo.

If you still have time, try the Japanese specialty snacks, dried foods, crackers, tea, jams, and the like. There are many types of rice crackers flavoured with various taste from garlic, miso to seaweed.  There are also chocolate-covered wafers flavoured like matcha tea, wasabi, plum, sake, melon, peach, grape.

But hurry-up grab your snacks, your plane is waiting!

Posted by stenote at 6:08 AM No comments: