Dubai, at the Dubai Mall 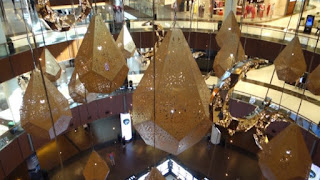 Arriving Dubai at six in the morning, while it was still cool, at the world class airport, made us feel like arriving in a modern oasis in the desert. The dusts of sand were not visible, no one seemed to be sweating, and the fragrance of perfume from the local people dressed in their traditional robes filled the air, it smells like the smoke of incense.

Upon leaving the airport, I realized that the airport is practically inside the city, cars started filling the roads rapidly as people trying to avoid the traffic jams which would come in a few more hours, with the heat of the day.

Soon I can see why Dubai is called the business hub of the Middle East, the Hong Kong of the Middle East. Oil revenue helped accelerate the development of the city, which was already a major mercantile hub, but Dubai's oil reserves are limited and production levels are low: today, less than 5% of the emirate's revenue comes from oil. Dubai's economy today relies on revenues from trade, tourism, aviation, real estate, and financial services. The most extravagant hotels, restaurants, attractions parks and beach resorts all made for us to enjoy the best this life has to offer.

One of the most sought-after leisure and shopping destinations is the Dubai Mall which attracted lavish shoppers from all corners of the world. Featuring over 1,200 retail stores, including retailers such as Bloomingdale and Galeries Lafayette, and hundreds of food and beverage outlets, the Dubai Mall covers more than 1 million sqm. It is the world's second-largest mall, a gargantuan complex with an aquarium, a virtual-reality theme park, an Olympic-size ice-skating rink, Gold Souk (Market) and hundreds of high-class boutiques and restaurants.

The Dubai Mall is structured like a city, with internal pedestrian streets, junctions and landmarks, integrated into the design and organized by wide, straight boulevards terminating at beautifully decorated junctions connecting the many shops. You can walk in the cool climate from Sega to Kidzania to the cinema, from Versace to Gucci at the Fashion Avenue to the electronic shops and drink, eat at the many restaurants and cafés in between. After tired of shopping and stuffed with food you can go watch the movies at the comfortable cinemas. It really feels like walking in a city in an oasis in the middle of desert, where you see nobody is thirsty or sweating despite the soaring heat of above 40 deg C outside the mall.