The Shoes in Milan 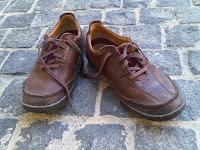 Like Rome, Milan was also deserted in August, which is how an empty business city looks like. Milan is also the centre of Italian fashion and has the oldest shopping mall in Europe named Galleria Vittorio 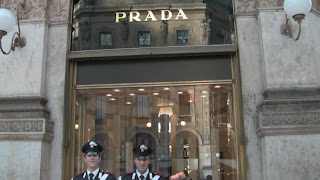 Emmanuale . The Art Nouveau styled Galleria houses famous boutiques and cafes. McDonald’s is also located there looking surprisingly classy helped by the surrounding. The huge Galleria (mall) stands at the side of piazza del Duomo facing the white marbled Duomo (cathedral). In the evening at sun down, the white marbled Duomo turned pinkish before the night.
Another interesting place is Castello Sforzesco, a huge castle compound with a fountain in front and houses several museums, a play ground, and a huge park with a lake. P 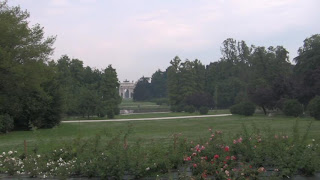 eople can easily spend the whole day there to see the museums and art collections. However there were more people in the Galleria than in the Castello, probably because of the grey weather, it rained in the morning. Or probably shopping is more interesting than seeing a castle.
Milan is of course the home base of AC Milan and Silvio Berlusconi’s construction business empire. He is the owner of AC Milan and not known to many he wrote the club’s anthem with the Italian music producer and pop singer Tony Renis. Apparently music and is one of his “talents”. He is also preparing an album singing Neapolitan songs that he wrote in a CD to be released by end of this year.
Milan also housed for the Last Supper by Leonardo da Vinci which is the most famous among other Last Suppers. The huge mural painting in the dining room of a convent in Milan however had deteriorated and flaked because of the wrong painting technique used by Leonardo on dry wall. The painting was restored several time, the last one took 21 years and completed in 1999.
There is limitation of entries per day to the dining room to avoid overcrowding the place, therefore visitors need to book in advance. Not knowing that, the shoes and many others came and were not allowed to the Last Supper. A seller of post cards stood in front of the gate yelling one Euro for three, one Euro for three….
Posted by stenote at 8:55 PM No comments: