A train from Tokyo to Narita Airport 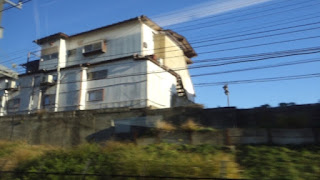 As Tokyo is such a big city and Narita Airport is located about 60 km from downtown Tokyo, we have to travel about one hour from Tokyo train station to the Narita Airport. There are many ways to go from Tokyo to Narita Airport, we can choose train, bus or taxi. I choose to travel by express train, it is not the cheapest, but it is most comfortable and the travel duration is certain. If we take bus or taxi, we never know whether there is traffic jam on the road, and we could be stuck for hours on the road.

With the ticket price of around 3,000 yen one way and 4,000 yen round trip, the Narita Express train offers comfortable seats with spacious leg room, large toilets. Not to mentioned the very clean and quite atmosphere found in most of the trains in Japan. We can only hear the monotone clacking sound of the train railway which is soothing and tranquilizing.

The train departs every 30 minutes and always on time, so we can rely on the travel plan based on the train schedule. But as the layout of train station in Tokyo is complicated, we must first familiarize with the train station layout to avoid getting on the wrong train or wasting time searching for the right platform. We can search in the internet or survey it ourselves before the departure.

The journey from Tokyo to Narita Airport will pass urban towns, it is enjoyable to watch the scenes of Tokyo passing by the window, the concrete buildings of the city gradually disappear as the countryside of Chiba appears. The dreamy journey ends as we hear announcement that the train is approaching the airport.

We need to get ready to disembark if our flight is located in Terminal 2, and pick-up our luggage. The train will only stop for a while as it will continue to Terminal 1. Therefore it is more convenient not to lock-up your baggage at the storage rack, because if you forget the code to unlock it then you have to ride the train till the end terminal, Terminal 1, to get it unlocked by the officer. Not to mention that you have to convince the officer the luggage is yours. It could really mess-up your well planned journey.

I saw this Japanese lady went pale and breathless as she forgot the code, nervously asking in Japanese how to get it unlocked. Her young daughter also looked helpless. I hope their flight didn’t say ‘sayonara’ to them on take-off.

Posted by stenote at 3:58 PM No comments: