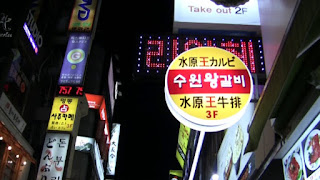 In the early evening when the Myeongdong streets get closed to vehicles traffic, the food stalls start to arrive serving various kind of Korean dishes. As the neon lights lit up the smoke from the grills raised to the air spreading mouth watering smell. You can walk from stall to stall finding foods judging from the appearance and the smell.


But unlike in Bangkok where you can eat entire meals on the sidewalk, in Seoul the street food are more along snack kind of food, things that can be eaten standing up or walking, catering to Seoul people that are walking from subway to subway.

In the dense grid of streets in Myeongdong, the food stalls lined-up in the middle of hotels, skin care shops, restaurants, cafés and night clubs. It is the hot spot of Seoul for tourists. From stalls to stalls, you can hunt for foods, but you must try first the Tteokbokki, a rice cake with fish, egg, scallion and a sweet and spicy red sauce. The firmness of the cake combined with the aroma of scallions and sesame seeds make it a delicious snack on a cool evening. A Tteokbokki serving costs around 2000 to 4000 KRW.


Along the rather spicy Tteokbokki, you may accompany it with Gimbap, a sushi like rice rolls, consisting sticky rice – ‘bap’ rolled up inside a seaweed sheet - ‘Gim’, filled with ingredients such as vegetables, tuna, crab stick, pickles and other variety. A serving of 3 to 4 roll slices costs about 1500 KRW.

Then you can try Hweori Gamja or tornado potato which is very popular Korean street food. It is a deep fried spiral cut potato, like tornado, which is then dipped in all kinds of toppings. These can include cheese, red pepper, honey or brown sugar. The tornado potato is a nice snack, easy to eat while walking in Myeongdong night market.

After eating those “snacks” than you can eat your “main dish” Sundae.  Don’t be mistaken it is not an ice cream, it is a Korean style blood sausage. Although the appearance of the sausage is rather off-putting, it is black, it is surprisingly tasty. It is originated back to the Goryeo period, recorded in 19th century cookbooks and it was initially meant to be served for special occasions. Depending on the vendor, the blood sausage can be stuffed with meat, glass noodles and all kinds of vegetables. A serving can cost about 6000 KRW.

Now you must be stuffed already,  if not you can try the Ppopgi. This is an old fashioned sugar candy, mostly sold and made by the older Korean generation. This ppopgi candy only has 2 ingredients, baking soda and sugar, but timing and technique are key to making the perfect ppopgi. Each ppopgi has a different shape pattern, back in the days if the kids could eat around the pattern without braking it, they would get a free ppopgi from the vendor. Try it, it is harder than it looks like. 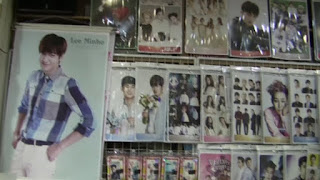 We can say that Myeongdong,  Seoul’s main shopping street, is the face of modern Korea which is driven by the “Hallyu“  or “Korean Wave” which is a collective term for the phenomenal growth of Korean popular culture encompassing everything from music, movies, drama to clothes and cuisine. The Korean Wave  first spread to China and Japan around the year 2000, later to Southeast Asia and several countries worldwide where it continues to have a strong impact and has become one of the biggest cultural phenomena across Asia.

As we walk in Myeongdong we can see various paraphernalia  of K-pop and K-drama in the shops, from calendars and coffee mugs to t-shirts, socks and even potato chips, just about everything featuring the faces of the country’s most celebrated idols.  We can see faces of K-pop girl group  Girl’s Generation, Blackpink, or boy group Exo , Super Junior on shirts as well as on stationeries, and also we can see traces of Winter Sonata, Autumn in My Heart, or My Sassy Girl on displays reminding us of the popular K- Dramas.
The Korean pop culture also influenced both women and men around Asia nowadays to have more interest toward Korean skin care and makeup products. Yoona of Girls’ Generation group has been chosen as a model for Innisfree, and Taeyeon also of Girls’ Generation promotes Nature Republic to bring Korean cosmetics to become a globally recognized brand with their clean images. Because of that in recent years, Korean cosmetics have stormed Asia in just about every corner. From face masks and body cream to cleansing products and hand lotions, Korea has some of the best, and most affordable, beauty products on the market.  That is why both small cosmetics shops and department stores at Myeongdong are always packed with many shoppers to look for the products of The Faceshop, Innisfree, Missha, Nature, Tony Moly, Etude House etc.

Myeongdong  which in Korean means “bright tunnel” or “bright cave” perhaps has its image enhanced by the bright, shiny, and polished image of this place and the Korean pop idols. You may see everywhere advertisement at this “bright tunnel” displays beautiful faces promoting flashy brand clothing, smooth cosmetics, and fashion accessories.  Whether shown on billboards or on TV screens, jackets, hats, and outfits can become iconic when worn by Exo’s Chanyeol,  Twice’s Nayeon, or BTS’ Suga. High rise department stores and small stores popping up acting as a platform to encourage you to buy latest style clothing, with a K-pop idol standing card-board welcoming you at the front door.

Posted by stenote at 7:14 AM No comments: