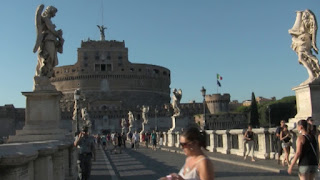 On the way to Vatican, we saw a huge round building that looked like a cholate tart, on the bank of the river Tiber. It is Castel Sant’Angelo, affectionately nicknamed ‘The Wedding Cake’ by locals due to its appearance. It is now a museum and has a long history which dates back to ancient Rome. Started as an ancient imperial tomb of Emperor Hadrian in the year 138, turned into fortress in the year 401, then functioning also as prison for many centuries.  Among the prisoners were the sculptor Benvenuto Cellini, charged with crime of sodomy; the philosopher Giordano Bruno, sentenced to death as a hardline heretic; Giuseppe Balsamo, known as a conman sorcerer; Beatrice Cenci, a noblewoman sentenced to death accused for having killed her abusive father. The prison was also the drama setting for the third act opera of Giacomo Puccini's Tosca.  In this tragic scene, Tosca, overwhelmed by the death of her lover, jumps to death to escape capture by her enemies from the wall of the prison.

On top of the castle we can see a statue of an angel holding a sword but not in a brandishing way, rather the angel is depicted to lower his sword to return it to the sheath. Why is it like that?  According to legend, at the end of the sixth century AD, a terrible plague fell upon the city,  named as the Justinian plague, with thousands falling ill and the bodies of the dead choking the street. The disease spread as far north as Denmark and west to Ireland, then further to Africa, the Middle East and Asia Minor.

Pope Gregory then led a procession through the city, praying to God to spare those who still lived. Looking up to the old mausoleum of Emperor Hadrian, long fallen into disuse and ruin, Pope Gregory had a vision of a radiant figure high atop the massive tomb. It was the Archangel Michael, his outstretched wings, glowing brightly and holding a bloody sword and then lowering it to return it back in the sheath. The Pope saw this as a sign of the end of the plague that had been raging for about 50 years. Indeed, after this vision, the plague ended, therefore the Castle was named as Castel Sant Angelo – Castle of the Holy Angel. The current bronze statue of Archangel Michael on top of the building was created in 1748 by Peter Anton von Verschaffelt, a Flemish sculptor, to replace the marble statue damaged by time.

Castel Sant’Angelo was slowly turned into a fortress and in 1277 it was acquired by the papacy. Popes used the castle as a refuge in this fortified structure in times of danger. Living conditions inside the fortress were probably not very comfortable, so Pope Paulus III decorated many of the rooms inside the Castel with beautiful frescoes, mostly done by Perino del Vaga. The most beautiful room is undoubtedly the Sala Paolina, with its lavishly decorated walls and ceiling. In the beginning of the 14th century, the Castle became the summer castle for the Pope. In 1901 it was converted to become a national museum, named the Museo Nazionale di Castel Sant’Angelo.

Posted by stenote at 2:42 PM No comments:

Rome, at the Spanish Steps 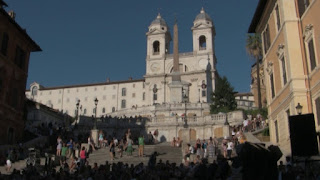 Walking for about 1 km from Fontana di Trevi, we will reach the Spanish Steps. The walk is only around 15 minutes, however in this place, we can find many interesting buildings in every turn, so it may take longer if you wish to ‘sight-seeing’ too.

The giant stone Spanish Steps starts from Piazza di Spagna (the Spanish Square) up to the Trinità dei Monti church. The 135 steps staircase, built in 1725 and designed by Alessandro Specki and Francesco De Santis, is a favourite spot among tourists to sit, relax and enjoy the views of Piazza di Spagna at the bottom. Piazza di Spagna itself was the location of the Spanish Embassy for Vatican in the seventeenth century. So the Spanish name was extended to the square and the steps as well.

As I climbed the Spanish Steps in a spring afternoon, in a moment I remembered the song “Credo” by the rock group Refugee:

I believe in constant pauses

And I often stop for air

As I climb the Spanish stairs

Indeed I often stopped for air, and near the top of the steps I also stopped and looked down to the Piazza di Spagna. This square is an important way to connect to the historic centre of the city and a famous gathering place for locals and foreigners. Some of the city’s most iconic streets branch off the square, such as Via del Condotti, Via del Babuino, Via della Propaganda and Via Sistina.

At the centre of the square lies the Fontana della Barcaccia, a fountain featuring a half-shrunk stone ship sculpted by Pietro Bernini,  father of Gian Lorenzo Bernini. The name Fontana della Barkaca means “Fountain of the Old Boat” as it has the form of a sinking ship based upon a folk legend. According to the legend, as the River Tiber flooded in 1598, water carried a small boat into the Piazza di Spagna. When the water receded, the boat was deposited in the center of the square, and it was this boat that inspired Bernini's creation.

Posted by stenote at 7:58 AM No comments: