Tibet, at the Musical Show 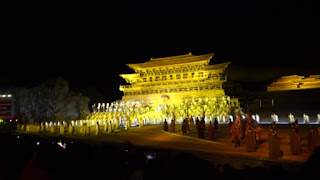 The Princess Wencheng musical show is really a grand show, the stage is spectacular set in open air, complete with the palace in Chang’an and the Potala palace in Lhasa. At one time we can see real horses running on a highground at the back ground of the stage, and in other time we can see cows and goats walking leisurely in the front part of the stage. The lighting system is also spectacular, sun and moon appear together from the darkness, and the waving huge cloths depicts the wild waves caused by hailstorm. The sound system loud and clear vibrate the melodious traditional songs on stage, apparently they use the most advanced sound technology. It is a wonderful marriage of a famous legendary story with modern technology, staged on expertly-designed theater beside a hilly mountain under the stars.

The story is about a marriage of two great cultures, Tibetan and Tang dynasty. The story happened about 1300 years ago when Princess Wencheng of the Tang Dynasty left Chang'an (Xi'an now) to marry Songtsen Gampo, king of Tibet. Their marriage was aimed to maintain good relations between Tang empire and Tibet. She and her entourage marched over 2,000 km from Chang’an to Lhasa, crossing deserts, hailstorms, and snow-capped mountains.

In her journey Princess Wencheng brought a substantial amount of dowry  which contained not only gold, but also grains, farming tools and technology to increase Tibetan agricultural productivity. She also brought Buddhist scriptures and statues of Buddha, among them was the golden statue of 12-year-old Sakyamuni Buddha, now placed in Jokhang Temple.

There are many folk legends about Princess Wencheng’s journey to Tibet which are depicted in the show. One of the legend tells about ‘the Sun and Moon mirror’, a precious mirror that the Tang Dynasty Emperor Gaozu gave Princess Wencheng before she set off on her journey from Chang’an.

The mirror was said to let her see Chang'an and her relatives from wherever she was. When the princess reached part of the Quilian Mountain Range, an important thoroughfare to Tibet, she got out of her carriage and looked around. It was cold and barren, she could only see snow capped mountains, then she felt a surge of homesickness. She recalled the words of the emperor when he gave her the mirror, ‘Whenever you miss your home, you only need to look in this mirror to see us’. She took out the mirror to see her hometown, but saw only her own tearful face. So, she threw the mirror down onto the mountain. But then she continued her journey to the west as she knew she had a duty to the two nations, and, resolving not to miss her country any more. The mirror was broken in two pieces shaped like the moon and sun. From then on, the mountain got its name, Riyue Mountain, the Sun and Moon Mountain.

The show is performed every night, from spring to autumn, on about a 100 meter long huge open air stage, in Bumpari.

Posted by stenote at 4:25 AM No comments: