Tibet, along the Yarlung River 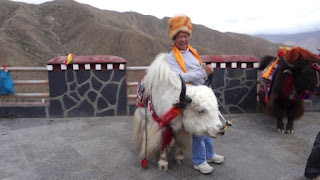 Our next trip was to go with a bus from Lhasa to Shigatse driving along the Yarlung River. The scenery of the clear river water, with mountains at the background and combined with green fields is amazing. The Yarlung River is 1,323 km long river originating from the Tibet-Qinghai Plateau in southeast Qinghai, and its join the Yangtze river in Panzhihua in southwestern Sichuan. It then passes through India flowing through the Assam Valley as Brahmaputra river.

Yarlung means “the river down from the upper reaches” in Tibetan language, has a large amount of water and irrigates the fields in the lower valley. There are many ancient villages scattered along the banks of the river, with many historical sites and temples, shrouded with colorful myths and legends. It is the cradle of Tibet’s ancient civilization, and the area is the earliest birthplace of Tibetan culture.

In Tibetan culture, rivers are sacred and in particular the Yarlung river is sacred as it represents the body of the goddess Dorje Phagmo, one of the highest incarnations. This reverence for the natural world was born from the Tibetan plateau and dates back centuries.  Now we can admire the clean river, undisturbed by human interference. When people swim in the river, they were told to never use it as a bathroom, because there are river gods in the water. There’s a very strict tradition that no one will go near certain water or do anything that would disturb it. They really don’t need laws to prohibit them to dump garbage or toxic wastes in the water to preserve the environment.

There is another reason, the Yarlung river is still used as water burial site, people dumped dead bodies into the river and fishes might consume the body, which partly explains why Tibetan do not eat fish.  Tibetans believe that upon death, the body retums to one of the elements - earth, air, fire, water, or wood. Water burial is considered as a derivative of the celestial burial.

Posted by stenote at 4:16 AM No comments: