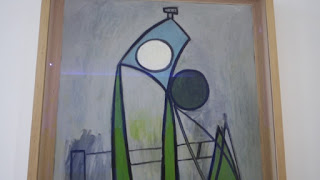 During the walkaround in Le Marais in noticed a street direction to Musée Picasso….., wow the Picasso Museum of Paris is here ?! Certainly not something to be missed. Hurriedly I followed the direction to the museum thorough the cobblestone streets lined with chic cafés and galleries to reach rue de Thorigny where the Hôtel Salé wherein the Picasso museum is located.

Set in the great 17th century Hôtel Salé, Picasso’s masterpieces hang on the walls of bright, spacious exhibition rooms. It contains many of Picasso’s paintings, drawings and sculptures. On the day I visited the exhibitions were mixed with the works of Alexander Calder, which was also very interesting.

Pablo Picasso was famous a Spanish painter, sculptor, regarded as one of the most influential artists of the 20th century.  He is known for co-founding the Cubism, a revolutionary style of modern art in response to the changing modern world. Some people say that Cubism is like looking in a cracked mirror everything becomes disorientated. The artists used multiple points of view to fracture images into geometric forms. Figures were depicted as dynamic arrangements of volumes and planes where background and foreground merged. Picasso did not feel that art should copy nature and did not like the more traditional artistic techniques of perspective, he said: “If the subjects I have wanted to express have suggested different ways of expression I have never hesitated to adopt them.”

Women play an essential role in Picasso’s paintings expressing emotion, psychological insight and the drama of human existence. Known for being a playboy, he had two wives, six misstresses and hundreds of lovers throughout his marriages. His romantic relationships provided inspiration for countless paintings,  drawings and sculptures. Each lover he painted can be seen to correlate with a different moment portraying a fascinating individual stories – sometimes joyful, defiant, or tragic in their endings.

The most famous of his women included those of Fernande Olivier, Olga Khoklova, Marie-Thérèse Walter, Dora Maar, Françoise Gilot and Jacqueline Roque.

While his lovers were such a valuable inspiration to his art, they seldom emerged from their relationships happily. Jacqueline Roque, his second wife, and Marie-Thérese Walter, mother of one of his daughter, committed suicide, and Olga Koklova, his first wife, and Dora Maar, his private muse,  became somewhat insane.