Strasbourg, the city of Europe 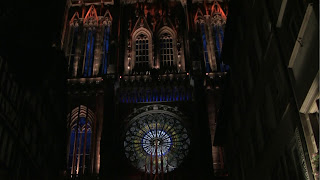 Strasbourg as the capital of Europe, is rather small and peaceful city, not as big and busy as Paris or Milan.  It seems that Strasbourg is very sweet and easy , compared with Paris.

Strasbourg is located close to the border between France and Germany in the historic region of Alsace. The name Strasbourg is of Germanic origin which means "Town (at the crossing) of roads”. It is a symbol of French-German reconciliation and European unity.

It is the official seat of the European Parliament, alongside Brussels and Luxembourg. Strasbourg is considered to be the capital of Europe due to the presence of several European Union and other institutions in the city.

In the historical centre of Strasbourg stands the Notre-Dame cathedral, a masterpiece of Gothic art, owes much of its charm to the pink  sandstone used for its construction. Although some of its parts are still in Romanesque architecture, the Notre-Dame Strasbourg Cathedral  is widely considered to be among the finest  Gothic architecture. Erwin von Steinbach is credited for major contributions to the cathedral  architecture from 1277 to his death in 1318.

Its rose window, which is about 15 meters in diameter, is  one of the biggest Gothic rose windows in Europe. It's very beautiful and majestic, especially when seen from the inside of the cathedral as it gives off a coloured light.

Strasbourg is also called The Capital of Christmas as the Christmas markets here are world famous, decorated with a huge Christmas tree in the town square. The first markets were held in 1570, making them one of the oldest in Europe and the very first in France.

Posted by stenote at 3:51 AM No comments: 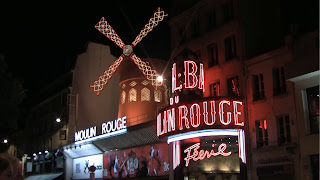 As a foreigner you can only guess what Montmartre means, it is easy to guess that “Mont” means “Mount” as the place is a large hill in Paris. But “martre” may sound a little like “mother”, so you think maybe it means Mary , the mother of Jesus. This association might arised after you visited the Notre-Dame, which means “Our Lady”.  So Montmatre maybe means the Mount of Mother, you think.


An Indonesian might think “martre” means “matre” which means materialistic. But people would not name a place like this a “Materialistic Mount”, so it is not possible to mean like that. Montmartre was once the place where artists, writers and bohemians who lived, worked and gathered in cafes and bars, while they were poor. Its low rents lured struggling artists whose canvases now sell for millions, such as Renoir, Degas, Picasso, Toulouse-Lautrec, and Utrillo.  So if we consider this, Montmartre should sound more like an “Artistic Mount” rather than “Materialistic Mount”, don’t you think so?


Actually rather than making some hazard guesses it is easier to open a dictionary , Montmartre is the French word for the “Mount of Martyrs”, as the name is related to the 3rd century bishop of Paris. Bishop Denis was apprehended by the Romans and sentenced to death for teaching Christianity. There are various versions of the bishop’s martyrdom. One legend states that he was beheaded on the hill, after which the body picked up the head and carried it to the Parisian Saint Denis suburb. The bust of the decapitated bishop is located atop the hill of Montmartre.

Nowadays, a popular landmark in Montmartre, the Sacré-Cœur Basilica is located at the summit of the hill, the highest point in the city. Sacré-Cœur means Sacred Heart as it is  dedicated to the Sacred Heart of Jesus, which was an increasingly popular vision of a loving and sympathetic Christ. The basilica was designed by Paul Abadie. Construction began in 1875 and was consecrated in 1919.


Montmartre was once  towered with 30 windmills, used to press grapes and mill  grain. Nowadays one of these windmills still stand, the famous  "Red Windmill" — the Moulin Rouge cabaret theatre.  When it opened in 1889, the lively nightclub seemed to sum up the pleasure-seeking belle époque, a period of high artistic or cultural development.


Unmissable as you wander Montmartre for the spinning red windmill on its roof, the Moulin Rouge is an unforgettable mix of colour, movement and sound. The cabaret show performed by young girls dancing the sexy Can Can, was a magnet for all Parisians. The show featuring beautiful topless dancers, has become world famous.

Paris, at the Notre-Dame 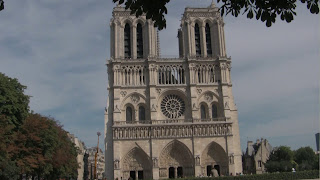 In the novel The Hunchback of Notre-Dame, a deformed ugly looking child was abandoned at the Notre-Dame Cathedral. The baby was named Quasimodo by Archdeacon Claude Frollo who adopted him.  This scene reminds me of a scene from the movie Rashomon by Akira Kurosawa, showing an unwanted baby abandoned at the ruined Rashomon Gate. The baby then was adopted by the Woodcutter (read “An Interview with Akira” in this blogspot).

In the novel The Hunchback of Notre-Dame, Victor Hugo wrote largely about Notre-Dame to make the people of Paris become more aware of the value of the Gothic architecture, which was neglected and often destroyed to be replaced by new buildings or defaced by replacement of parts in a newer style. The first three chapters of the novel are a plea to preserve Gothic architecture—in Hugo’s words, a “gigantic book of stone,” which he found beautiful.

After centuries of mistreatment, additions, vandalism, and purgings, the visitors find a beautiful cathedral that was not as it is today.  Victor Hugo was able to bring about the salvation of a magnificent church because he was able to capture the lost beauty of this church with his novel.

Now the cathedral is widely considered to be one of the finest examples of French Gothic architecture, and it is among the largest and best-known church buildings in France, and in the world. The naturalism of its sculptures and stained glass serve to contrast it with earlier Romanesque architecture.

However, currently the cathedral has required an extensive makeover once again due to deterioration, broken gargoyles and fallen balustrades replaced by plastic pipes and wooden planks. Flying buttresses darkened by pollution and eroded by rainwater. Pinnacles propped up by beams and held together with straps.

Little of that deterioration is immediately visible to the millions of awe-struck tourists who visit the Cathedral of Notre-Dame, many of them too busy admiring the intricately sculpted front to notice the deterioration.

Everywhere the stone is eroded, and the more the wind blows, the more all of these little pieces keep falling. Experts say Notre-Dame, although not at risk of sudden collapse, has reached a tipping point, therefore it needs a make-over, an expensive make over estimated to cost 150 million Euro.

As Victor Hugo wrote in his novel, the words ring true today 150 years later: “Assuredly, the Cathedral of Notre-Dame at Paris is, to this day, a majestic and sublime edifice, but noble as it has remained while growing old, one cannot but regret, cannot but feel indignant at the innumerable degradations and mutilations inflicted on the venerable pile, both by the action of time and the hand of man.”

Paris, at the Eiffel Tower 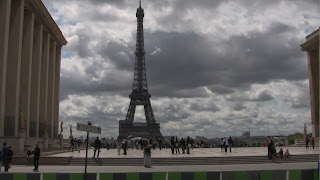 Arriving at Charles de Gaulle Airport in Paris in a cool afternoon, I noticed how huge, busy and modern airport it is. Terminal 1 was built to an avant-garde design, comprising a ten-floor high circular building surrounded by seven satellite buildings, each with four gates. The main architect was Paul Andreu, he is famous for his work on various airports, including Dubai International Airport and Shanghai Pudong International Airport.

After clearing my passport and collecting my bag, I head towards the shuttle train station. The ticket cost around 10 Euro, for a 35 minutes ride to Gare du Nord, nearby my hotel.

The next morning, after a good breakfast of bread, cheese, a benedict egg and orange juice, the first place to go is off course the Champs-Élysées. The Champs-Élysées avenue is 1.9 kilometres long and 70 metres wide, running between the Place de la Concorde and the Place Charles de Gaulle, where the Arce de Triomphe is located.  The name is French for the Elysian Fields, the paradise for dead heroes in Greek mythology. The Champs-Élysées  is known for its theatres, cafés, luxury shops, and for the annual Bastille Day parade, and as the finish of the Tour de France bicycle race.

The monument at  the beginning of the avenue, The Arce de Triomphe, honours those who fought and died for France in the French Revolutionary and Napoleonic Wars, with the names of all French victories and generals inscribed on its inner and outer surfaces. The Arc de Triomphe is the biggest arch in the world. It was commissioned by Napoleon in 1806 to celebrate his victory at Austerlitz, designed by Jean Chalgrin in 1806.  Beneath its vault lies the Tomb of the Unknown Soldier from World War I.

Constructed as the entrance to the 1889 World's Fair, it was initially criticized by some of France's leading artists and intellectuals for its design, but it has become a global cultural icon of France and one of the most recognisable structures in the world.

The Eiffel Tower brings magic to Paris when the nights come. The sparkling lights are made up of 20,000 light bulbs, 5,000 per side.  Paris is called the City of Lights because of its dazzling landmark boulevards and bridges illuminated with thousands of light bulbs each night. Paris was also one of the first European cities to adopt gas street lighting.

However, the name actually stems from its cultural legacy. It used to be dubbed The City of Lights, because Paris was the birthplace of the Age of Enlightenment and was known as a centre of education and ideas throughout the whole of Europe. The city inspired many poets and philosophers, engineers and scientists.