Tokyo, at the Disney Parade 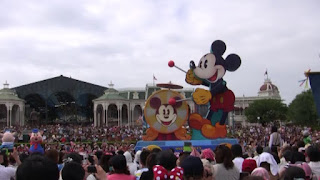 Seeing the people arriving at Disneyland in Tokyo, we can understand why Disneyland claims that it is “The Happiest Place on Earth”.  Since before the opening hours, many visitors excitedly rush out of the metro train to see how this place looks like.  Expecting a welcoming early entrance to site, their excitement dies out rapidly after seeing the massive long queues at the entrance gates.

Everybody have to line-up in the long queues, kids, teens, parents, grand-parents, while they start to feel the Disney atmosphere during queuing.  Joy fully Mickey Mouse in his black tuxedo greets kids at the front garden, and their smiles are captured in the photos they make. Thus the long queuing experience is not so bad, thanks to the Disneyland’s hospitality and efficiency, as well as to the Japanese considerate behavior.  The long queues are even forgotten once the visitors enter the main gate of the Disneyland to a different world, a mini world from the eyes of kids as told in story books and movies.

But we can see that actually the number of kids is much lower than the number teens and young adults visiting the theme park, perhaps because the young adults are more mobile to go around while kids need their parents to accompany.  Surely Disneyland realized these numbers and provides a wide range of attractions to suit all ages and personalities. Here we can see that many of the attractions are made for the young adults, focusing on activities, ridding, adventures, and romantic musicals.  Further the adults and the teens can enjoy the nostalgia of their childhood by meeting Winnie the Pooh, Donald Duck, Sleeping Beauty after the rides on the Pirates of the Caribbean, the Indiana Jones  and the Jurassic Park.

One of the most popular attractions in Disneyland is the daytime parade which features gigantic floats with Disney characters dancing to the music. The theme of the parade that time was “Happiness Is Here” which enhances the Disneyland’s claim to be “The Happiest Place on Earth”.   So to say, who cannot be happy watching the parade lead by Goofy on a horse, followed The Three Little Pigs pulling Mickey Mouse drum toy, and Pinocchio leads a magical train with Sleepy and Grumpy as passengers. Donald Duck, Daisy Duck, Pluto, Chip 'n' Dale ride an enormous float featuring a carousel, canopies, and  Minnie Mouse waving on the back. Then the final float features Mickey Mouse and Minnie Mouse aboard a giant hot air balloon made out of Mickey Mouse balloons. The balloon is held up by Goofy, and Mickey and Donald wave goodbye to the guests.

It was definitely a memorable parade, the happy characters dancing to the repetitive music in tune with what Walt Disney once said: “Laughter is timeless, imagination has no age, and dreams are forever."

Posted by stenote at 2:05 PM No comments: