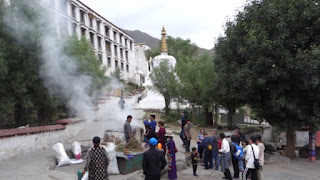 About 8 kms west of Lhasa, we can find Drepung Monastery, located a slope of Mount Gephel. Surrounding the monastery we will see many houses and building with white walls and roofs scattered along the hill. Because of this the monastery is also called “rice heap” monastery.

On the way to the monastery we can see a large stone painting on the hill which seems to depict a deity. It is the painting of Tsong Kha Pa, the founder of the Gelug School of thought in Buddhism. In this tradition, the classical Indian treatises are studied with great detail using dialectical method.

Drepung monastery was founded in 1416 by Jamyang Choge Tashi Palden, one of Tsong Kha Pa main disciples and also known as the second Dalai Lama. Drepung was the largest monastery in the world, and was housing around 7,700 monks during the hey days. Historically, Drepung used to be the seat of political and religious power in Tibet, before the Potala Palace was built, in part due to it being the primary seat of the Gelug School. In 1530, the second Dalai Lama built his palace here, known as the Ganden Palace, which was used until the Potala Palace was built.

Drepung monastery complex is large, and if we wish to visit all main buildings, it will take you all day. Most of the visitors choose the most important buildings, such as the Grand Sutra Hall, the Ganden Palace and a few chapels nearby.

The Grand Sutra Hall (Tsogchen)  is the largest structure in the complex and the most impressive. The Grand Sutra Hall is a 3 storey building with the large terrace overlooking the city of Lhasa and the valley. The main statue there is the 3-floors high Maitreya (Future) Buddha. In addition, there are statues of Shakyamuni Buddha (Siddhārtha Gautama) , Tsong Kha Pa, 13th Dalai Lama and protectors in the chapels.

Posted by stenote at 7:06 AM No comments: