The Face Changing of Sichuan Opera 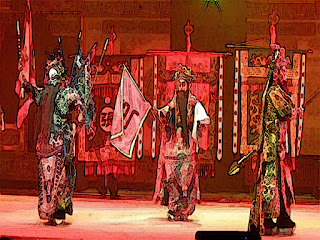 The face-changing performance in Sichuan opera is one of its kind in the world, and the technique has been tightly kept secret. The face-changing , actually mask-changing, originates from the ancient times when humans in China decorated their faces with colors and patterns to scare away animals.


The masks are prepared and pasted on the face, each of which is tied  with a yarn to the costume of the actor. During the performance, the masks are torn away one by one by pulling the yard and the previous mask is replaced by a new one. The action has to be performed in quickly so that the audience does not notice how it happens.


Sichuan Opera is one of the most famous traditional Chinese operas. It was originated in Sichuan province about 1,700 years ago. Sichuan Opera plays an important part of the Chengdu culture and has wide spread in south-western China. The most famous parts in the opera show are "Changing Faces", "Fire Spitting", "Rolling Lamp", “Folk Music", "Hand Shadow" and "Puppet Opera".


A skilled performer can change faces many times, and four changes is not uncommon. But knowing how it’s done and being able to performed it are two different things. It’s protected as a kind of state secret. The art of face changing has been passed down through families as a closely guarded secret. In 1987 the skills of face changing were listed as a “second-level state secret” by China’s Ministry of Culture.


The costumes, dances and singing are quite similar to Peking Opera, but the Sichuan Opera has more stunts, such as blowing fire, rolling lamps and the most famous face changing.


In the famous Sichuan Opera of “Madam White Snake”, about the love between a man and a snake sorceress, the actor playing the White Snake spirit changes faces eight times, from blue, red, white, black and other colors.  It’s very demanding to tear the face, the masks cannot stick together and the hand movement must be quick and unnoticed.


The Sichuan Operas had been performed for centuries in China, but then came the devastating 10 years Cultural Revolution from 1966 through 1976.  With that China's performing arts suffered considerably. Mao saw all art should represent interests of the common class and demanded that Opera should serve the workers, peasants and soldiers. Art should be an explicit propaganda for the revolution and should help to convert the masses to socialism.


The arts were then completely controlled by the government and the actors no longer had any control of what was to become of their performances. The only opera that was allowed to be performed during this period was called  'model opera', with contemporary and revolutionary themes and with realistic staging and costumes.


Mao Zedong's wife, Jiang Qing, rewrote many of the operas using contemporary themes and her interpretation of the communist ideology. It is believed that she pushed for these ‘model opera’ , to reform, rewrite operas to be the only ones that were acceptable to be performed.


Not only was the theme changed, but the musical style changed as well. There were many more Western instruments and instead of a small group of musicians entire orchestras were performing. There are far fewer percussive sections, which were usually attributed to fight scenes. Even the singing was westernized, following bel canto style. Ironically, Western instruments were banned during this time, yet were allowed to be performed because the music was based on 'model operas'.


Then, the end of the decade-long Cultural Revolution in 1976 marked the end of 'model opera'. Traditional opera made its way back to the theatres and is now regularly practiced, but much damage has been done. During that decade many actors died, retired, or simply lost the touch of their art because of the lack of ability to practice it.


But that there are still older actors that made it through the Cultural Revolution and are still performing today and even though traditional opera has been greatly damaged, traditional theatre in contemporary China is still thriving.


Operas are being reformed again, but this time simply to appeal to modern audiences and not in an attempt to control the content that is getting out to the public. For intellectual urban audiences, plays with daring political and philosophical themes are staged with imagistic rather than realistic scenery and original, historically-based costumes, extraordinary classic-based scores, and innovative instrumentation.


Although the Cultural Revolution was devastating for much of China, including its art, Sichuan Opera rebounded easily afterward. The economic reform of the late 1970’s helped, as did the continued evolution of theatrical technology and technique. Today’s opera patron gets to see the best of the old and the new in Chinese opera.


Modern opera still holds long years of tradition and is blossoming in its recovery from the Cultural Revolution. Many older operas are being performed, some in pure traditional style and some with modern twists. Considering every reform that Opera has been through, one might be surprised at how much of the originality is still retained.


Sichuan opera stands out for its variety of stories. Some say there is an endless range, drawn from its diverse background and the broad culture of rural China. The Sichuan operas are a big favourite enhanced by “trick performance” like the face changing show.