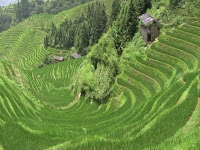 The Longsheng Rice Terraces, is located in Longsheng County, about 100 kilometres from Guilin, China.

Also known as Dragon Backbone Rice Terraces (Longji Rice Terraces) it is the most amazing rice terraces in China. Construction of the terraces began in the Yuan Dynasty (1271-1368), and completed in the Qing Dynasty (1644-1911). The Dragon Backbone Rice Terraces is constructed by the hard labor of the Zhuang people, which is now a minority ethnic group in this region.
It is hard to imagine that 800 years ago how the Zhuang and Yao people faced to the mountains and forests, and how they rely on ancient agriculture method to open the forest and to prepare the ground for the first field.
The Dragon's Backbone Rice Terraces is a beautiful landscape. The rice fields is beautiful all year round, and the view of the rice terraces vary from season to season. In spring, the irrigation water reflects the sunshine on the terraces, and when the paddies are full of water it seems like the scales on the back of a dragon, thus it is named as Longji (Dragon Backed Mountain).
In summer the newly grown paddies cover the terraces like green carpet. In autumn the paddies turn into golden ready for harvesting, while in winter it is covered by snow. The rice fields are beautiful all year round.
Longji consists of Ping´an Zhuang Minority and Jinkeng Da Zhai Yao villages scattered in the middle of rice terraces.   People here kept their traditions, in the streets but also rice terraces, they are easily recognized by their traditional costume.
The colors for Zhuang’s clothing are blue, black and brown. The Zhuang women are skilled at weaving and embroidering. They wear this unique and colorful costumes especially during festivals, to dance and sing in accordance with the tradition.
The Yao people also have distinctive clothing, and they are expert weavers, dyers and embroiderers. In the Han Dynasty (206 BC-AD220), they wove with fabrics made from tree bark and dyed it with grass seeds. In the Song Dynasty, they developed delicate designs dyed on white cloth with blue indigo and beeswax. The product became famous all over the country later.
The Yao women also have distinctive hair styles and they are famous for having the longest hair in the world. They never cut their hair. Instead they wrap the hair in a bun on top of their head in a turban style. Their hair color remains shining black no matter how old she is. What is the secret? The secret is for generations of Yao women have been using fermented rice water, which has resulted in their impressively beautiful hair. Women from the tribe have an average hair length of 2.3 metres.
For the Yao people, their long hair is their most prized possession, believing that long hair symbolises prosperity, longevity, wealth and good fortune.
The way a woman wears her hair depends on her status:
•A young unmarried woman will wear her hair covered by a black scarf.
•A married woman with children will wrap her hair around her head like a turban and wear it with a bun in the front.

In ancient time, so to say, the wives in the Yao families were the ones who earned living for the family, and they had to work hard in the rice fields, carrying heavy stuffs in big bamboo basket at her back. While the husbands were laid back, staying at home playing cards and drinking beer. So laid back were the husbands that even sometimes a wife had to carry her husband in the basket to walk the hundreds of steps climbing the terraces, while the husband drank beer in the basket.

However, nowadays we can see Yao men have to work to make a living, they provide the bamboo basket service for tourists, and the tourists in a big bamboo basket at his back to climb the 800 steps to see the scenic rice terraces.
Ping´an village is a Zhuang ethnic village built on the hillside amid stunning Longji rice terraces.
The Ping’an Village has the best preserved, oldest and largest wooden buildings  of Zhuang Ethnic style, more than five wooden buildings of which has over 100 years. The oldest one enjoys a history of more than 250 years, which is ancient and full of charm.
Along the 800 steps we can the padi fields and the unique traditional style of houses. Built largely from timber, the houses are typically rectangular and three stories high. Each ascending floor is a little larger than the lower. The shingles, windows and beams are typical of other Chinese building styles.
One of the most famous scenic spot is the "Seven stars with moon". It is composed of seven small terraces and a large round terrace. When the terraces are filled with water during spring, we can see seven small terraces are like shining stars around a moon.
Indeed the residence here are very imaginative and like to resemble shapes in the landscape with other shapes of nature. This habit we can find in other scenic places in China, like in Guilin. But that is another story….