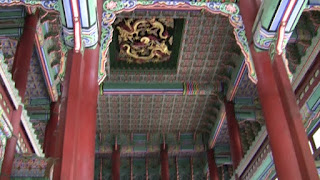 As I entered the main audience halls of the Gyeongbokgung Palace, I looked up at the ceiling and I was amazed by the patterns of colourful ornaments, in red, blue and green, which bloomed on the eaves (the part of a roof that meets or overhangs the walls of a building). I could see the grand depictions of dragons on the ceilings, they were shown as two yellow dragons flying in the sky. In the Eastern tradition the yellow color is associated with the centre, so it is the color of the centre of the power.

Dragons have been part of Eastern mythology since ancient times, and it is a major symbol of the king’s authority and dignity. A dragon flying up into the sky symbolizes the ideal that a sage man will ascend to the throne. This comes from the mythology in which a dragon that had been hidden in the waters rises and flies up to Heaven. So the flying yellow dragons depicted on the ceilings, as well on the canopy over the king’s throne symbolize the king’s central position, from where the he rules the world around him with authority and dignity.

Walking around I also noticed many other animal figures at the palace, these animals are lucky symbols signifying long life, peace and well-being, and happiness. These include the qilin (kirin in Japanese), elephants, deer, and cranes engraved on the Hall of the Gyeongbokgung Palace. There are also animal figures that are supposed to drive away evil spirits and prevent misfortune. Among these are the cheollok seen around the Yeongjegyo Bridge in Gyeongbokgung Palace, when evil spirits or bad people crossed the bridge, these mythological animals attacked them and chased them away.

King Taejo, the first king and the founder of the Joseon dynasty, in 1392 decided to move government to Hanyang (current Seoul) in the third year of its reign, and started construction of Gyeongbokgung Palace in 1394. This location of the place is surrounded by 4 mountains, mount Bugaksan to the North, mount Namsan to the South, mount Naksan to the East and mount Imwangsan to the West. The arrangement of these mountains was believed to attribute Gyeongbokgung with a good fengshui.

Construction of the palace began in December 1394 under the joint supervision of Jeong Do-jeon, an influential government minister, and his associate Sim Deokpu. Jeong Do-jeon, who was also a leading Confusian scholar, designed the palace reflecting the philosophy of Confucianism. He wanted to reflect the principles of the Joseon dynasty in accordance with the ideals in Confucianism. According to Confucianism one needs to train his mind and body before he can teach others and rule the world.

Therefore Jong Do-jeon suggested that the palace should not be a symbol of sovereign power, but a place where the king himself cultivates his mind and rule over his people with the assistant of good government officials.  He wanted to build a palace that’s not grand or imposing, but rather simple and elegant. Building an extravagant palace would not be a value in Confucianism.

Jong Do-jeon also gave name to the palace Gyeongbokgung, which means the ‘Palace of Shining Blessings’. ‘Gyongbok’ is a word borrowed from one of the Confucian scriptures which means ‘to enjoy good fortune and prosper’. The word ‘gung’ means palace, so ‘Gyeongbokgung’ suggested good wishes to the new dynasty.