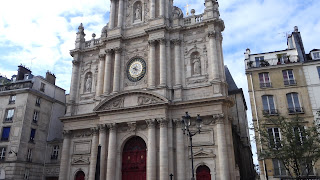 I and a few colleagues used our free day after a business meeting in Paris to go Le Marais district. Coming out from the Hotel de Ville metro station, we were struck by the huge Hotel de Ville directly in front of the metro station.  I was wondering how expensive it would be to stay in such a grand Hotel. But actually, it is not a hotel, it is a Municipal Building. After some googling I found that in French ‘hotel’ could mean home, building, residence, so it does not always mean hotel as the place to rent rooms to stay for tourists.  Nowadays, in addition to its city administrative function, Hotel de Ville is also a place of art and culture. There are many interesting exhibitions inside the building and the at the square in front of the building.

Hotel de Ville, the largest Municipal Building in Europe, is located on the banks of the Seine river and the edge of Le Marais district. The streets lead us to the fashionable district, full of lovely shops, cafes and art galleries. Today, Le Marais is one of the best districts in Paris, a mix of medieval architecture, trendy shops, cultural sights and lifestyle that is unique. A district of narrow streets on the right bank of the Seine river, where you can enjoy this historic place, the aesthetic buildings and  the French culinary.

Eight hundred years ago, Le Marais was a swamp. The French word ‘marais’ literally translates to ‘swamp’ in English, thus this place was called Le Marais because of the swampy quality of the land on the banks of the Seine. To provide new agricultural space, the swampy areas were turned into commercial gardening. For a long time, this area fell in and out of style due to changes in the fertility of the land and the difficulty of building on the swampy area.

In the 16th century, king Henry IV dried Le Marais and the place became the favourite area to build prestigious mansions, where most of the greatest aristocratic French families lived. The golden age of Le Marais continued till the 17th century, making it a center of artistic and cultural life. The nobles built their mansions (in French: ‘hotel particulier’) such as Hotel de Sens, Hotel de Sully, Hotel de Beauvais, Hotel Carnavalet, Hotel de Guénégaud and Hotel de Soubise. The mansions were decorated magnificently, with refined furniture and some luxury items from this golden period.

Following the up and down of the Bourbon monarchy, the economic depression, the French revolution, the restoration of Paris, Le Marais also went up and down. It was raised in the 16th century, destroyed during revolution and wars, reserved by André Malraux in 1962, then renewed by the municipal council in 1969.

Strolling through Le Marais today we can appreciate the aesthetics of the area as it became a popular commercial area, and hosting one of Paris’ main Jewish communities. It also became a fashionable district, most of the mansions turned to museum, libraries and schools, surrounded by the best clothes and food shops, and modern art galleries.