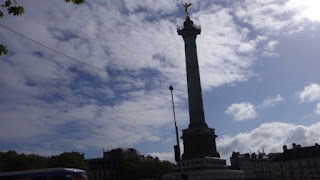 On the second day of our free time from office, I and my colleagues went to Bastille and other parts of Le Marais. We thought we would see the historical Bastille prison raided during the French revolution on July 14, 1789, but there is such prison there. The prison has been demolished and in place instead a column symbolizing peace was erected on the site and still stands there today.  The name of the Column is Colonne de Juillet, the July Column. It measures 47 meters in height and comprises 21 cast bronze drums that sits on a white marble base with ornamented bas reliefs, designed by the architect Jean-Antoine Alavoine under the orders of King Louis Philippe.

The square is now known as the Place de la Bastille and is an official historical monument of France. On the south side of the place there is a large curved and reflective building, it is the Opéra Bastille. It was built by the architect Carlo Ott, and was unveiled by President Mitterrand for the 200th Anniversary of the French Revolution on the eve of July 14th 1989, The Bastille Day.

Over the years this district became one of the most famous places in Paris. The night-life here is well-known, there are many bars and nightclubs laid between the Rue de Lappe, the Rue de la Roquette and the Faubourg Saint-Antoine.

Walking on the left side of Boulevard Beaumarchias, going away from the Place de la Bastille, at the second street we came to Rue du Pas de la Mule.  After a left turn, in a few steps we noticed the red-bricked buildings that make up the Place des Vosges. This mansion, built in the early 1600s, is a square composed of 36 houses with an arcade that runs the perimeter of the square. The park in the center of the Place des Vosges is called Square Louis XIII. Often, the grassy areas are available for use here.

Walking down an arcade with columns and a vaulted ceiling of the Place des Vosges, it felt as if we had just entered the 17th century. Directly ahead, past the fine cafés and art galleries, at the corner of this arcade, is the house addressed 6 Place des Vosges, Maison de Victor Hugo, the house once lived in by Victor Hugo. It is now a museum, opens every day, except Mondays and holidays.