Verona, at the Cathedral 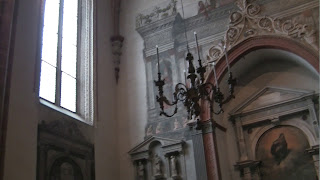 The cathedral, at the banks of Fiume Adige in the northernmost point of Verona, is just a short walk from the Ponte Pietra bridge. It is actually a cathedral complex, since it includes the San Giovanni in Fronte baptistery, the church of Santa Elena, the remains of the first paleo-Christian basilica built, the Cloister of the Canons, and the Capitoline Library.

The cathedral Santa Maria Matricolare, is a fantastic mix of Veronese Romanesque with Gothic elements. The interior of the cathedral mainly represents a Romanesque church, divided into three naves by pilasters from red Veronese marble supporting Gothic arches.

When we enter the cathedral, the first thing to strike you are the richly decorated side chapels, featuring works of art produced over several centuries of Venetian control. In the first chapel to the left hung a picture by Titian of the Assumption. It is a grand painting, showing the apostles kneeling and staring at Santa Maria floating in towering clouds. This painting was taken off to Paris by Napoleon I during his reign, but restored to Verona after he had left Europe.

The sanctuary is enclosed by a curved choir screen made by Sanmicheli and decorated with a Crucifixion by Giambattista da Verona. The sanctuary itself has frescoes by Francesco Torbido, based on drawings by Guilio Romano.

From the back of the cathedral we pass into the adjoining small church of S. Giovanni in Fonte, which served in past times as the Baptistery. The baptismal octagonal font located in the middle of the church was carved from a single block of marble. It was created by the Veronese sculptor Brioloto.

In the altar of this church there is a painting by Felice Brusasorzi depicting the Madonna on the throne with Child, St. Stephen, St. Zeno, St. Giorgio and St. Elena.

A church dedicated to Saints George and Zeno was built on the site and consecrated between 842 and 847, but was destroyed in the earthquake of 1117. The current church is the result of the reconstruction of the destroyed church, which was completed in 1140.