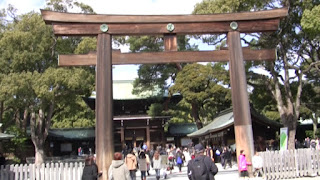 Entering the Meiji Shrine ground from Harayuku station we will find a huge wooden torii gate which marks the beginning of this Shinto shrine. Like other Shinto shrines, a visit to this place is like a pilgrimage which gradually transforms the world from the mortal to the sacral. The torii gate serves as the entrance dividing the profane human world from the sacred home of the divine spirit (Kami). We see people bowing when they pass under the torii, to show respect as they enter into the sacred site.

Then we follow the winding gravel path approaching the shrine, called sando. The pathway is surrounded by huge trees, like a deep tranquil forest.  It doesn’t feel like we are in the middle of Tokyo, in Shibuya district, one of the busiest commercial area. In this serene forest we can only hear the sound of birds chirping and the visitors’ footsteps on the gravel.

The shrine is dedicated to the divine spirit (Kami) of Emperor Meiji and the Empress Shoken. Emperor Meiji laid the foundation of modernization of Japan, known as the Meiji Restoration, ending the Tokugawa shogunate influence. Under his leadership Japan adopted Western ideas and production methods to industrialize the country. Japan opened the country to the world and emerged from a closed society to one of the most modern societies in the world, in less than 40 years. After the Emperor died in 1912, the parliament decided to build a memorial site in the area near Yoyogi Park, this shrine site, because the emperor and his wife liked to walk through the gardens here.

In Shinto, something divine is regarded as Kami (divine spirit), it can be found in mythology, in nature, and in human beings. Japanese people are amazed and have gratitude towards such Kami and enshrined them. In this way the Meiji Shrine is dedicated to honouring the Kami of Emperor Meiji and his wife. We can feel the whole site as an awesome home for the Kami, reflecting how the Japanese people honour and feel grateful to their emperor and empress.

Before entering the main sanctuary we can also go to the Juyosho, Amulet Kiosk, to buy charms and amulets or writing our wish on an ema, a wooden tablet. People wrote everything from wishing good luck, passing exams, to get a child, love and broken hearts, forgiveness and gratefulness. There are also omamori (protective amulets) for traffic safety, health, or success in education. Omamori are usually attached to or put into a bag, purse or pocket, and kept until they have fulfilled their purpose.

Then we approach Minami Shinmon, the main entrance to the main shrine complex. The gate is a two-story building, made from Japanese hinoki cypress, and copper roof. We can see small heart-shaped patterns carved into the wood work as ornament. When passing through the gate, we must step over the wooden beam under the gate, and not step on it, and bow our head to show respect while passing through the gate.

On the east side of the main shrine complex there is the Kaguraden, a building where the Shinto people pray and participate in the special ritual (Kigansai). During the special ritual a kagura, or sacred music and dance, Yamato-Mai, is performed as an offering to the Kami. This sacred dance is based on a poem by Emperor Meiji saying that we should not forget paying respect to the Kami, as we owe our existence to the them.

Next to the the Kaguraden, is the most sacred building, the honden, where the Kami are enshrined. The main shrine is built in the nagare zukuri style, a common style of Shinto shrine architecture. In this style, the roof at the front of the shrine is extended covering the steps up to the building. The honden includes the noritoden (prayer recital hall), the naihaiden (inner shrine hall), and the gehaiden (outer shrine hall). The gehaiden is at the front of the main shrine, and is where visitors pray.

On the way-out we pass through the Iris garden, a beautiful garden designed by the emperor for his wife. In summer, many types of irises, the empress' favorite, blooming in violet, blue, and white colors. Further down there is the Kiyomasa’s well a pure spring. It is named after a military commander who dug it around 400 years ago. The well was visited frequently by the emperor and empress while they were alive.