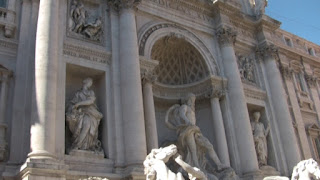 Wherever we go, grandeur monuments are usually located in a spacious popular plaza to enhance the monument’s grandeur presence and importance. We can easily navigate these monuments as the location must have been popular and we can see the place from a distance. But this monument that we are going to visit is different, it is stuck in a narrow square surrounded by buildings, restaurants, shops in the middle of the city. There are many streets leading to this place, they are narrow streets passing through ancient buildings, restaurants, shops. Surrounded by building, while walking we cannot see what is a head of us in a distance. Thus, coming from via del Lavatore, as we turned the corner, the suddenly monument emerged in front of our eyes with its grandeur, with a distinct sound of gushing water. Statues of ancient Greek mythological figures stand out in the fountain, presenting a drama in the green water. The crowd admire the monument from the side of the fountain, and trying to figure out what the display is telling us.

It is Fontana di Trevi, the grand fountain depicting Oceanus, the Sea God, the divine personification of the ocean, standing in a shell chariot to tame the water.  The shell chariot is drawn by winged horses led by Tritons, one Triton struggles with a wild horse whilst the other Triton hold a tamed one. The theme “Taming of the Waters” is presented in grandiose baroque style at the backdrop of Palazzo Poli. Designed by Italian architect Nicola Salvi in 1732 and completed by Giuseppe Panini in 1762 after the death of Nicola Salvi, and was decorated by artists from Bernini School.  Its facade and reef were constructed using Travertine, an elegant natural stone formed by hot springs near Tivoli.

In ancient Rome, water was worshipped as divine substance and the availability of huge water supplies was considered a symbol of opulence and therefore an expression of power. The Fontana di Trevi water is supplied by the Aqua Virgo duct, an aqueduct originally completed in 19 BC by Marcus Agrippa.  Aqueducts serve to transport freshwater from water source in highland about 13 kms away through ducts on top of arcades and underground. Gravity alone was utilized to transport enough water for most of the civilization, yet the aqueducts had very small gradients to do so. The design and construction to create aqueducts transporting high volume of water over long distances and varying terrains demonstrates the wealth of the civilization constructing it.  In this context, the theme “Taming of the Waters” portrays in dramatic way the Greek Sea God Oceanus taming the waters, like the way the ancient Roman aqueduct arranged the water and the civilization’s amazing ability to control and manipulate water.

The 11 aqueducts of ancient Rome ensured enough water supply into the city to provide for more than a million inhabitants, but the Aqua Virgo duct terminating at Fontana di Trevi is the only aqueduct still being used in modern times as it mostly ran underground. Today, most of the water is recycled for environmental reasons, but the source is still from the ancient Aqua Virgo duct.

In the crowd we can see some people throw coin into the fountain over his opposite shoulder. This habit  root back thousands of years BC, whereby valuable items were tossed into water sources to keep the water gods happy. In modern times, we still do that with a wish to return to Rome. Around 3,000 Euro is tossed into the fountain every day, the money is collected each night and given to a charity that supports the needy.

Fontana di Trevi is really a dramatic fountain that scathed an wonderful memory of Rome, so when we leave Rome this time saying “Arrivederci Roma”, Goodbye Rome, we wish to hear “Bentornato a Roma”, Welcome back to Rome, the next time…..