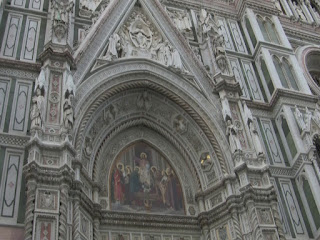 The Basilica di Santa Maria del Fiore (Basilica of Saint Mary of the Flower) is the cathedral of Florence, Italy. The cathedral is commonly called the Duomo.

The cathedral complex, located in Piazza del Duomo, includes the Baptistery and the Bell Tower. These three buildings are part of the UNESCO World Heritage Site covering the historic centre of Florence and are a major attraction to tourists visiting Tuscany.

The basilica was designed by Arnolfo di Cambio with the dome by Filippo Brunelleschi. The bell tower was designed by Giotto.
The outside of the Duomo  is decorated with marble panels in green and pink bordered by white. The construction began in 1296 and finished in 1469, except for the decoration. The facade (the main front) was decorated between 1876 and 1903.
The dome of the Duomo,  designed by  Brunelleschi  is built of bricks in octagonal shape, it is the biggest brick dome in the world.   It is a masterpiece capable of withstanding lightning, earthquakes and the passage of time, it continues to enchant all those who observe it from afar. Brunelleschi's astonishingly innovative approach involved vaulting the dome space without any scaffolding by using a double shell with a space in between. The inner shell (with a thickness of more than two metres) is made of light bricks set in a herringbone pattern and is the self-supporting structural element while the outer dome simply serves as a heavier, wind-resistant covering.
The dome is crowned by a lantern with a conical roof, designed by Brunelleschi but only built after his death in 1446, while the gilt copper sphere and cross on top of the lantern, containing holy relics, was designed by Andrea del Verrocchio and installed in 1466.
The Last Judgement fresco on the internal wall of the dome is made by Giorgio Vasari  flanked by Vincenzo Borghini, who worked to the iconographic subjects and added other themes taken from Dante‘s Divine Comedy.
Most of the splendid stained glass windows were made between 1434 and 1455 to the designs of famous artists like Donatello, Andrea del Castagno and Paolo Uccello. The wooden inlays on the Sacristy´s cupboards were designed by Brunelleschi and other artists, including Antonio del Pollaiolo.
The Baptistry in the Piazza del Duomo complex,  named Battistero di San Giovanni (Baptistry of St. John)  is renowned for its three sets of artistically important bronze doors with relief sculptures. The south doors were created by Andrea Pisano and the north and east doors by Lorenzo Ghiberti. The east doors were dubbed by Michelangelo the Gates of Paradise.
It took Ghiberti 21 years to complete the Gates of Paradise. These gilded bronze doors consist of twenty-eight panels, with twenty panels depicting the life of Christ from the New Testament. The eight lower panels show the four evangelists and the Church Fathers Saint Ambrose, Saint Jerome, Saint Gregory and Saint Augustine.
Above the Gates of Paradise stood the Baptism of Christ by Andrea Sansovino.
The Italian poet Dante and many other notable Renaissance figures, including members of the Medici family, were baptized in this baptistery.
The Bell Tower designed by Giotto, is a slender structure is square in plan with 14.45 metre sides. It is 84.7 metres tall and has polygonal buttresses at each corner.  It is the most eloquent example of 14th century Gothic architecture in Florence.
Clad in white, pink and green marble like the Duomo adjacent to it, the majestic square bell tower, considered to be the most beautiful Bell Tower in Italy.
The rich decorative apparatus comprising hexagonal panels and lozenges embodies the concept of Universal Order and tells the story of the Redemption of Mankind.

Based on www.museumflorence.com and Wikipedia.org