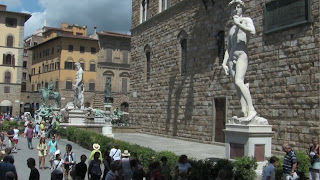 “Rejoice, O Florence, since thou art so great,

That over sea and land thou beatest thy wings,”


Indeed Florence is a great city and one of the most beautiful cities in the world. Its works of art and museums are acknowledged by Unesco. Besides its artistic and architectural greatness, Florence was a centre of medieval European trade and finance and one of the wealthiest cities of that era and is considered the birthplace of the Renaissance.

The square in front of the Palazzo Vecchio known as the Piazza della Signoria is packed with the work of famous sculptors such as: Giambologna, Baccio Bandinelli, Bartolomeo Ammannati, Benvenuto Cellini, and Michelangelo Buonarroti. All these artists were born in Florence or were resident of Florence.
Every statue tells its own story taken from Greek or Roman mythology. Effectively it is an open air gallery of renaissance art. Every statue is original, except the David statue is a replica. 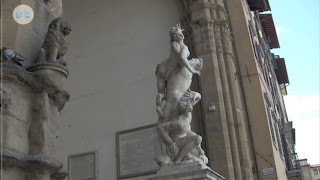 Giambologna’s statue the “Rape of the Sabine Women” is based on a Roman mythology, in which the men of Rome, under Romulus, committed a mass abduction of young women from the other cities in the region. Giambologna sculpted a representation of this theme with three figures (a man lifting a woman into the air while a second man crouches), carved from a single block of marble. This sculpture is considered Giambologna's masterpiece. 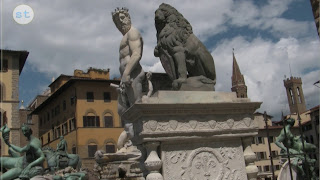 “The Fountain of Neptune” situated beside Palazzo Vecchio is made of marble and bronze, the fountain was commissioned in 1565 and designed by Baccio Bandinelli. It is the work of the sculptor Bartolomeo Ammannati with some elements created by collaborators.

Neptune is the god of freshwater and the sea in Roman religion. In the Greek tradition, Neptune is the brother of Jupiter and Pluto. 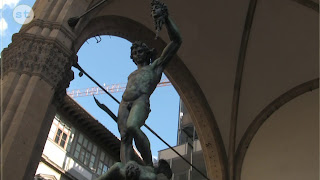 “Perseus with the head of Medusa”, is a bronze sculpture created by Benvenuto Cellini. It is considered a masterpiece and is one of the most famous statues in Florence’s Piazza della Signoria.
It depicts Perseus as he stands on Medusa’s body and holds her head up in the air. Medusa was a hideous woman-faced Gorgon whose hair was turned to snakes and anyone that looked at her was turned to stone. 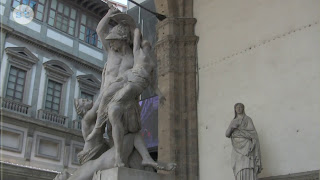 “The Rape of Polyxena” is a marble statue created by Pio Fedi. In this statue Polyxena is struggling to get away from Achiles while he easily contains her in one arm. The other arm is about to strike down her mother, Hecuba, with his mighty sword. 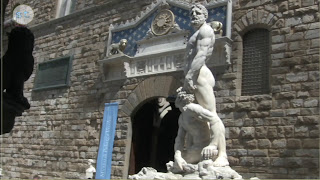 “Hercules and Cacus” is a white sculpture to the right of the entrance of the Palazzo Vecchio. This work by the Florentine artist Baccio Bandinelli. Here, the demi-god Hercules, who killed the fire-belching monster Cacus during his tenth labor for stealing cattle, is the symbol of physical strength. 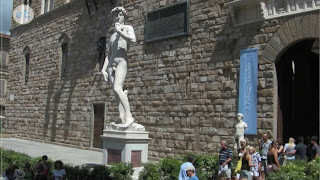 “David” is the most iconic statue in Florence, and one of the most recognizable. In this statue, David is just standing there, looking over his shoulder. Michelangelo sculpted David the moment directly after challenging Goliath, at a moment prior to one of the most defining points in history.

The statue of Cosimo I de Medici  by Giambologna indicates the Medici's ambitions and is an portrait of the man who brought all of Tuscany under Medici military rule.  He was an Italian banker and politician, the first of the Medici political dynasty, de facto rulers of Florence during much of the Italian Renaissance. His power derived from his wealth as a banker, and he had a great appreciation of arts and architecture.
Cosimo and his heirs rule from this place and from his office next door, which is now the Uffizi museum.
It is said that Bandinelli's Hercules and Cacus  to the right of the David statue was appropriated by the Medici to show their physical power after their return from exile. The Neptune statue by Ammannati celebrates the Medici's maritime ambitions. The statue of Perseo holding Medusa's head, by Benvenuto Cellini, is a stark reminder of what happened to those who crossed the Medici.