Milan, at the Last Supper 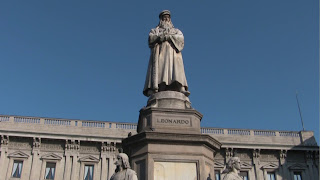 The monument of Leonardo da Vinci by sculptor Pietro Magni is located at the center of Piazza della Scala in Milan. The Piazza is connected  with Piazza Duomo by the shopping mall Galleria Vittorio Emanuele II.

Leonardo da Vinci worked and lived  in Milan in the 15th century at the Sforza Castle, under the Duke of Milan Ludovico Sforza.
His job was to take care of the cultural life and the arts at the court of Milan. During this period, Leonardo da Vinci was busy with inventions, the expansion of the canal system and the construction of locks as well as the study of man. During his time in Milan, he also created the famous mural painting "The Last Supper".
The Last Supper is contained in the church Santa Maria delle Grazie in Milan, which is displayed in the dining hall of the convent. It was painted on the northern wall of  the dining hall for the Dominican monks. It measures fifteen by twenty-nine feet. It stands whole as of today, except for the construction of a doorway in 17th century, eliminating the lower central area of the painting. Leonardo da Vinci set the long dining table at stage center in this room, with Jesus at the center surrounded by the 12 apostles.
It is said that the look of every apostle was based on a real-life model. When it came time to pick the face for the traitorous Judas (fifth from the left, holding a bag of telltale silver), da Vinci searched the jails of Milan for the perfect looking scoundrel.
During world war 2 the Allied bombers struck and heavily damaged the Church. The Dining hall was razed to the ground, a few of the walls survived, including that of the Last Supper, as it had been reinforced prior with sandbags.
The Last Supper, which miraculously survived the Allied bombing, suffers from other problem which are due to Leonardo’s experimental technique, which deteriorated the painting faster than expected.
Careful treatment of the extremely delicate paint layer restored the painting hidden colours. The church and convent have been the object of continuous restoration  from the 1990s onwards, following a unified conservation strategy.
The church Santa Maria delle Grazie was originally commissioned by the Dominican Order to Guiniforte Solari for their monastery. Solari designed a beautiful structure in a late Gothic style, which was completed in 1490.
Ludovico Sforza, the Duke of Milan, decided that the church Santa Maria delle Grazie would be a perfect burial place for him and his wife, and in preparation asked Donato Bramante to remodel the church. Bramante rebuilt the apse and crowned it with a magnificent sixteen-sided drum in Renaissance style.
Both the interior and exterior of the church show an interesting combination of Gothic and Renaissance styles. The sober brick facade was designed by Guiniforte Solari while the Renaissance-style entrance is attributed to  Donato Bramante.
The central nave and aisles are magnificent examples of late Gothic architecture. It features elegant pointed arches embellished with delicate frescoes. The Renaissance style is less decorated and seems almost sparse in contrast. Along the aisles are a number of chapels, many of which are beautifully decorated with frescoes.
The church and convent has been included in the UNESCO World Heritage sites list.
Sources: Wikipedia