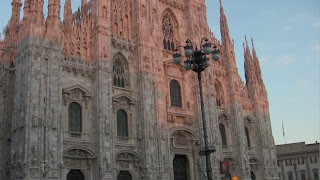 Milan Duomo is the cathedral church of Milan, Italy. It is dedicated to Santa Maria Nascente (St Mary of the Nativity). It is the most impressive structure in Milan. Standing tall in Piazza del Duomo, it took more than 600 years to built. The front facade of the Duomo was completed only in the 19th century.

This cathedral is a genuine Gothic masterpiece with more than 3,500 statues of saints, animals and monsters, and 135 towers stretching towards the heavens.
The roofline dissolves into openwork pinnacles that are punctuated by a grove of spires, topped with statues that overlook the city. The main spire is 109 meters high. These can all be investigated up close on a breathtaking walk on the roof.
The most famous of the statues on the roof is the Madonnina (Little Madonna), a copper statue of the virgin Mary covered with 3900 pieces of gold leaf. It was cast in 1774 by goldsmith Giuseppe Bini and sculptor Giuseppe Perego. The statue, four meters and sixteen centimeters tall , was placed on top of the cathedral's tallest spire.
The Duomo's most imposing element, the front façade facing Piazza del Duomo, was completed in the 19th century. The façade is baroque up to the first order of windows, and neo-Gothic above. The five ornated bronze doorways provide a magnificent entrance to the Duomo.  Each of the five bronze doors was sculpted by a different artist. The central one is the oldest and was decorated with floral Gothic reliefs by Ludovico Pogliaghi. The panels on the doors depict episodes in the lives of the virgin Mary, Saint Ambrose (patron of Milan) and Saint Charles Borromeo, as well as scenes from the history of Milan and the construction of the cathedral.
The inside of Milan's Duomo is expansive and magnificent. There are five large naves divided by fifty-two pillars - one for each week of the year - that support the cross vaulted ceiling.
Above the apse (the arched part above the altar) there is a spot marked with a red lightbulb. This marks the spot where one of the nails of Jesus’ crucifixion was placed.
The American writer and journalist Mark Twain one time visited Milan and the Duomo, he was very impressed by the Duomo and describes it in his travel book “Innocents Abroad” as follows:
“What a wonder it is!
So grand, so solemn, so vast!
And yet so delicate, so airy, so graceful!
A very world of solid weight, and yet it seems ...a delusion of frostwork that might vanish with a breath!... “