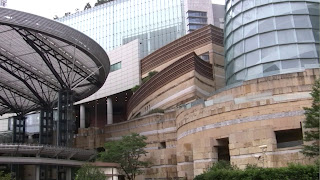 Roppongi Hills is a development project in Tokyo and one of Japan's largest integrated property developments, located in the Roppongi district of Minato, Tokyo. Constructed by building tycoon Minoru Mohri, the mega-complex incorporates office space, apartments, shops, restaurants, cafés, movie theatres, a museum, a hotel, a major TV studio, an outdoor amphitheatre, and a few parks.

The centerpiece is the 54-story Mohri Tower. Mohri's vision was to build an integrated development where high-rise inner-urban communities allow people to live, work, play, and shop in proximity to eliminate commuting time. He argued that this would increase leisure time, quality of life, and benefit Japan's national competitiveness. Seventeen years after the design's initial conception, the complex opened to the public on April 25, 2003.
The first six levels of Mohri Tower contain retail stores and restaurants. Roppongi Hills features more than 200 shops, cafes and restaurants. Most shops specialize in fashion, accessories, interior design and household goods, while restaurants offer a wide array of Japanese and international cuisine.
The top six floors house the Mohri Art Museum and the Tokyo City View with panoramic views of the city. A new exit from Roppongi Station empties into a glass atrium filled with large television screens and escalators, as well as several shops and restaurants. The rest of the building is office space.
Large open spaces have been built into the design of Roppongi Hills. About half of the area consists of gardens, pavilions, and other open spaces. A small oasis of greenery between the tall buildings of Roppongi Hills, the Mohri Garden is built in the style of a traditional Japanese landscape garden complete with a pond and trees. The garden has a number of cherry trees that make it a nice spot to enjoy the cherry blossom season in late March and early April. The Mohri Garden is a part of a lost mansion that housed members of the feudal Mohri clan.
By night, Roppongi becomes Tokyo’s most foreigner-centric nightlife spots, a center of late-night hedonism and fun. Bars, pubs, clubs and restaurants jostle for attention among the bright lights, giving visitors in search of a good time options the whole night.