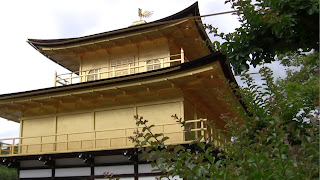 Kinkaku-ji which means Temple of the Golden Pavilion is a Zen Buddhist temple located at the foot of the gently-sloping Kinugasa Hill, northern Kyoto, Japan. The Temple’s top two floors are completely covered in gold leaf. The image of the temple richly adorned in gold leaf reflects beautifully in the water of Kyokochi, the mirror pond.

The Pavilion, that constitutes of Kinkaku-ji, gardens and other buildings, is said to be designed to realize Buddhist paradise on the earth. The Pavilion's first purpose was to serve the retiring Shogun Ashikaga Yoshimitsu as a residence.  Yoshimitsu was a one of the most powerful persons during the Muromachi period of Japan. He created a solid political foundation of Muromachi shogunate and restored the relation between Japan and China. The Pavilion was turned into a Zen temple after Yoshimitsu’s death in 1408, and continues to function as a temple of sacred relics.

The roof is in a thatched pyramid with shingles. The building is topped with a bronze phoenix ornament. In Japanese mythology the Phoenix brings goodwill as it descends from the heavens and is typically shown sitting on top of a gateway to a Shinto shrine. This ornament adorns the roof of the Kinkaku-ji Temple, it is a symbol of an imperial household.

From the outside, viewers can see gold plating added to the upper stories of the Pavilion. The gold leaf covering the upper stories hints at what is housed inside: the shrines. The outside is a reflection of the inside. The elements of nature, death, religion, are formed together to create this connection between the Pavilion and outside intrusions.

The garden complex is an excellent example of Muromachi period garden design. The Muromachi period is considered to be a classical age of Japanese garden design. The correlation between buildings and its settings were greatly emphasized during this period. It was a way to integrate the structure within the landscape in an artistic way. The garden designs were characterized by a reduction in scale, a more central purpose, and a distinct setting. A minimalistic approach was brought to the garden design, by recreating larger landscapes in a smaller scale around a structure.
Source: Wikipedia