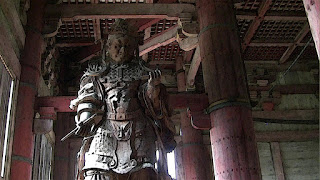 Nara is the capital city of Nara Prefecture located in the Kansai region of Japan. Nara was the capital of Japan from 710 to 794, lending its name to the Nara period.

Tōdai-ji or Eastern Great Temple, located in the city of Nara, is a Buddhist temple complex that was once one of the powerful Seven Great Temples. Todai-ji , is a complex of buildings that includes the world's largest wooden structure, and the main hall houses the colossal bronze Buddha statue .
Buddhism’s influence grew in the Nara era  during the reign of Emperor Shomu and his wife, Empress Komyo who fused Buddhist doctrine and political policy—promoting Buddhism as the protector of the state.
In 741, reportedly following the Empress’ wishes, Emperor Shomu ordered temples, monasteries and convents to be built throughout Japan’s 66 provinces under the jurisdiction of the new imperial Todai-ji to be built in the capital of Nara.
The vast temple at Todaiji was constructed as a symbol of imperial power, and took over 15 years to complete at great expense. Emperor Shomu’s motives to build Todai-ji temple on such an unprecedented scale seem to have been a mix of the spiritual and the pragmatic: in his bid to unite various Japanese clans under his centralized rule, Emperor Shoumu also promoted spiritual unity.
Todai-ji would be the chief temple of the monastery system and be the center of national ritual. Its construction brought together the best craftspeople in Japan with the latest building technology. It was architecture to impress—displaying the power, prestige and piety of the imperial house of Japan.
On the centre of this Buddhist temple, you will be able to find the biggest statue of Great Buddha, or Daibutsu, made of bronze. The height of the statue is reaching 15 meters and weighs 500 tons.
The Buddha is seated with the palm of his right hand extended forward. This gesture means "fear not" and “conversion of jealousy and envy” into all-accomplishing wisdom.
Deer, regarded as messengers of the gods in the Shinto religion, roam the grounds freely. According to legend a mythological god, Takemikazuchi, arrived in Nara on a white deer to guard the newly built capital of Heijokyo.
The deer that populate Nara are Sika deer or spotted deer and are also known as bowing deer because they often times bow their heads before being fed.
You will find a lot of deer and you can also feed them if you want, but you need to buy the food first.