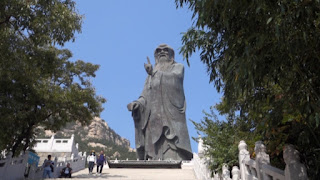 After seeing the Laoshan coast we head to the Taiqing Gong temple which is not far from the beach on the southern slope of this mountain. Between the temple and the beach there is a large square, the name of which is Taiqing Square of course, which is also a stop for buses to go up and down the mountain. At the sides of the Square there are food stalls and there are also ice cream sellers, there we tried for the first time an Ice Cream wafer from Russia, it tastes so good, with a thick milk taste.

Taiqing Gong is the oldest and largest Taoist temple in Laoshan Mountain, it is simple, ancient and solemn. According to legend, its founder, Zhang Lianfu, wandered to Laoshan Mountain in 140 BC, and found a serene spot under Laojun Peak.  He chose to build a secluded temple at this location, and gave the disciples to worship, laying the foundation of Taoism in Laoshan. Due to its long affiliation with Taoism it is often regarded as one of the “cradles of Taoism”.

Qing Dynasty writer Pu Songling visited Laoshan Mountain in 1672, and lived in the Taiqing Gong temple, but he couldn't afford to live in the wing because of poverty. He could only lay the floor at night. When writing, he used a wooden board as a desk. The candlelight on the table at night was the best lighting. Pu Songling only visited the two famous mountains of Taishan and Laoshan in his life, but two visits to Laoshan have left a story of the ages.  One of his classical stories is ‘The Taoist Priest of Laoshan’ reflects the mysteries and magical practice adapted by the Taoist priests there.  A wall which is said to be the prototype of the wall the Taoist passes through (in magical way) in Pu Songling's novel is still visible in Taiqing Palace.

Taoism (also known as Daoism) is a Chinese philosophy attributed to Lao Tzu (c. 500 BCE), it emphasizes doing what is natural and "going with the flow" a cosmic force which flows through all things and binds and releases them. This flow of harmony is called Tao, or “the way.” In the 81 poetic verses that make up the Tao Te Ching, Lao Tzu outlined the Tao for individual lives as well as leaders and ways of governance. The philosophy grew from an observance of the natural world, and the religion developed out of a belief in cosmic balance maintained and regulated by the Tao. The original belief may or may not have included practices such as ancestor and spirit worship but both of these principles are observed by many Taoists today and have been for centuries.

Following 108 stair steps, under the Laojun Peak, stands a huge statue of Lao Tzu. Its height is 36 meters and width 28 meters at the base. The statue was built according to the painting of Lao Tzu by the famous painter Wu Daozi in the Tang Dynasty period. Lao Tzu is pointing to the sky with his left hand and the earth with his right hand, which means "from heaven to earth, there’s only the Tao".