Laoshan, at the Mountain 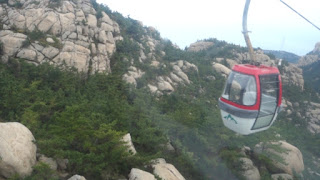 Laoshan, or Mount Lao as shan means mountain in Chinese, is a mountain located around 30 km from Qingdao on the shore of Yellow Sea , China.  It is the highest coastal mountain in China and the second highest mountain in Shandong, with the highest peak (Jufeng) reaching 1,132 metres. High in the east with cliffs near the sea, and gentle in the west with rolling hills. From the heights of the mountain we can view the blue sea giving this mountain the title of "the most famous mountain on the sea".

Laoshan is surrounded by sea on three sides and carries rivers on its flat back. Its special geomorphic environment with mountains meeting the sea has created marvelous view with the sky, clouds, mist and glowing sunlight often forming a variety of images. Laoshan has a typical granite glacial landform. The granite peaks and hills in Laoshan are rich in pictorial stones with all kinds of strange postures under the effect of water erosion and weathering.

The mountain is also inhabited with various tall ancient trees, which impressed Deng Xiaoping and said when he visited Laoshan: "This place is very good. With such a few large ancient trees alone, it can attract a lot of people. So it has conditions to arrange for opening up and the development of tourism”.

The place is now named Laoshan Scenic Area, a national forest park with the largest and most complete protection of natural forest ecosystems of larches and pine trees in China's cool zone.

There are 230 ancient trees of 39 species. The 2,100-year-old Han Dynasty Cypress (Cloud-reaching Han cypress) in Taiqing Palace with three trees growing in symbiosis, is regarded as a sacred tree by the locals. The 1,000-year-old Tang Dynasty Elm  is a peculiarly shaped tree that is one of the most ancient elm trees in northern China. It is also known as the "Dragon Head Elm" because its trunk is curved like a dragon's head.

We can view this beautiful scenery of Laoshan by riding a cable car to the mountain peak, and we can view the granite rock mountain with pine trees and various kind of trees.