Tokyo, seen from the Tokyo Tower 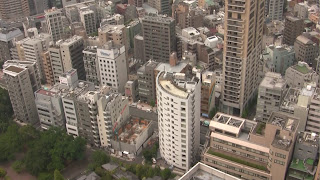 Tokyo is officially known as a "metropolitan prefecture", which differs from and combines elements of a city and a prefecture, a characteristic unique to Tokyo.  The Greater Tokyo Area is the most populous metropolitan area in the world.
The Metropolitan area of Tokyo is a cultural hub bursting with historical traditions versus the relatively new cities’ buildings and huge shopping obsession.
With over 13,000,000 people  Tokyo is known as one of mega cities in the world. Many people commute from neighbor cities to Tokyo. During the daytime, the population swells by over 2.5 million as workers and students commute from adjacent areas.
In Tokyo, there are 49 buildings and structures that stand taller than 180 metres. Skyscrapers are a relatively recent phenomenon in Japan. Due to Tokyo's location on the Pacific and Eurasian tectonic plates, it is prone to earthquakes. This caused many of the buildings to be lower in height than those of major cities of its size.
However, this fact has not deterred Tokyo from building skyscrapers, and the modern-day city boasts more high-rise buildings than just about any other city in Asia - possibly even the world. Engineering is a key feature of Tokyo's skyscrapers, taking precedence over height and beauty.
Tokyo Tower is a communications and observation tower in the Shiba-koen district of Minato, Tokyo, Japan. At 332.9 metres, it is the second-tallest structure in Japan. The structure is an Eiffel Tower-inspired lattice tower that is painted white and international orange to comply with air safety regulations. Built in 1958, the tower's main sources of income are tourism and antenna leasing. Over 150 million people have visited the tower.
At the center of Tokyo, the Tokyo Imperial Palace is located as the primary residence of the Emperor of Japan. It is a large park-like area located in the Chiyoda ward of Tokyo and contains buildings including the main palace, the private residences of the Imperial Family, an archive, museums and administrative offices.
It is built on the site of the old Edo Castle. The total area including the gardens is 1.15 square kilometres. The modern palace is designed by Japanese architect Shōzō Uchii and was completed in 1993. The Palace complex  contains buildings including the main palace and other buidlings. The palace is surrounded by a water-filled moat and tree-covered grounds - a precious taste of nature within the bustling metropolitan city.
Source: Wikipedia